Launch Of Our New Club!!! 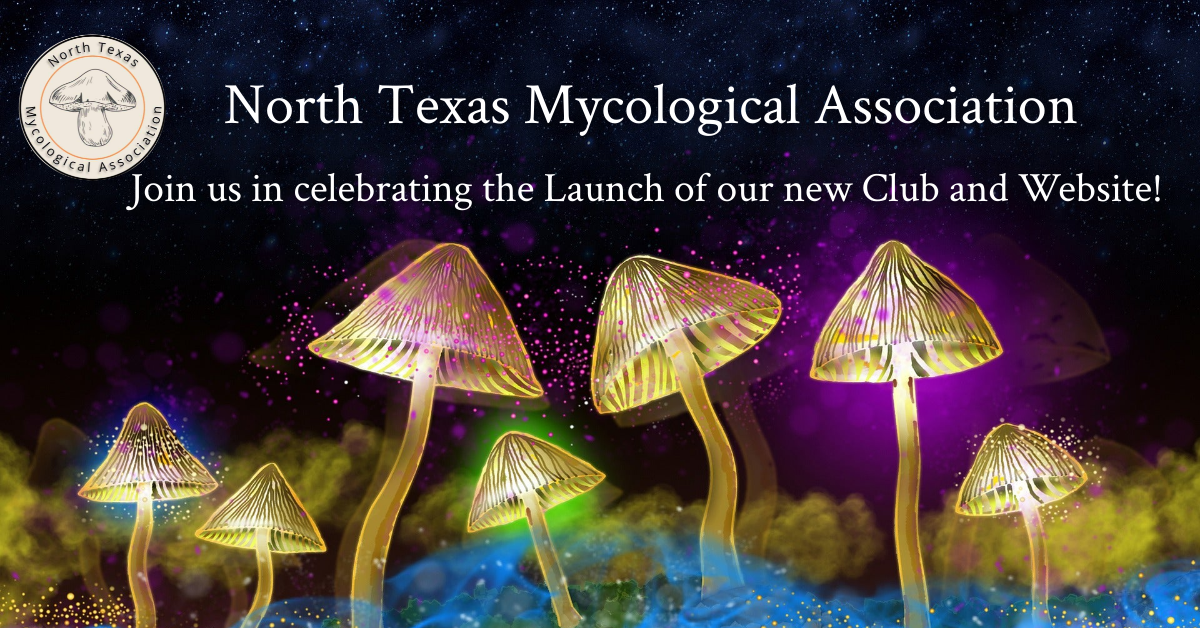 Welcome to the launch of the North Texas Mycological Association Club and Website. Come in and check out our pages and learn about who we are. We welcome all who wish to join our passionate about fungi community to become a member. We have also started to expand our social media presence, so along with our Facebook Group, find us on Instagram and Twitter and Discord. We look forward to meeting you on a foray, event, a class, or at a greet and meet, or any other organization sponsored program. Once we were only a spore floating through the air with no home in sight… and now we are connecting throughout Northern Texas with hopes of building a wonderful symbiotic relationship with our community. If you would like to know more about how the club started, read the Origins of the North Texas Mycological Association below.

In 2015, our founder Sebastian Tabibi was desperately seeking others in the North Texas community who shared the same enthusiasm and passion for mycology. After countless hours of searching for a group that was local to the Dallas and Fort Worth metroplex or surrounding vicinity and not having any luck, he decided to begin a group called “North Texas Mushroom Hunters” on Facebook.

As the years went by and the group grew in its popularity and members, Sebastian realized there was a huge demand for the formation of a permanent, non-profit organization dedicated to the study of mycology in North Texas and the surrounding area. With the desire to become a nationally recognized club, he knew the best way to achieve this goal would be to attend the North American Mycological Association (NAMA) National Conference.

Bruch Reed, the Chief Operating Officer of NAMA, instantly understood after hearing Sebastian’s pitch that the North Texas area had been severely neglected in terms of having an organization to support the study of fungi and to help preserve their natural habitats. To be the fourth largest metroplex in the nation and to not have any mycological clubs was a shocking surprise, so Bruch agreed to let Sebastian return to Texas with the good news of being approved to start one of NAMA’s newest clubs: The North Texas Mycological Association.

Sebastian knew that once he returned to North Texas he had quite a task to accomplish and would need valuable assistance. After asking his friends and random members in the Facebook group, he was very humbled to receive so much support from people he had never met from all over the North Texas area. Energized and more motivated than ever, Sebastian started to form the Board of Directors consisting of Author and accomplished Master Naturalist, Eva Gordon, veteran foray leader, and mushroom expert Patrick Harris, and accomplished naturalist and mushroom expert Leah Breitenstine.

At the first Board of Directors meeting, the entire group realized that we needed two very important but simple things… financial support and volunteer help. Gathering financial support was difficult from the beginning, but thanks to the generous donation of our first sponsor, Texas Fungus, we were able to secure enough capital to take the first steps to make the association official.

The process of making the North Texas Mycological Association official started by creating a bank account, opening a P.O. Box, applying for 501C3 non-profit status, purchasing a domain name, and creating this website. We have already conducted several forays, and are planning culinary events, youth programs, and we will soon be featured in our local National Public Radio (KERA) after being interviewed by reporter, Miguel Perez.

Additionally, after one of our first large group forays, we realized that to keep track of a large group, we would need to invest in a set of 10 walkie-talkies as a preventative measure to assure that members do not get lost during forays. We are also in the process of acquiring numbered neon orange vests so that our foray groups are highly visible when we venture into deep woods. We value safety above all else.

This association is a non-profit in which all of the members who manage and develop the association donate their time without pay. We would like to thank our many passionate volunteers that now make up our Team Mycelium. Our organization is growing just like a mycelial network should, but we are always in need of more help and more volunteers so if you want to get involved please contact us on our Facebook Group or by Email.

We have had the good fortune of receiving donations from several sponsors, including Texas Fungus, and Texas Mycology Supply. We are currently working diligently to acquire more sponsorships and a few are in negotiations. As a member of this Association, you will be getting exclusive discounts ONLY offered to our members from participating sponsors, and both of our current sponsors are participating with offering those discounts to our members. Also, we will be connecting with various nature organizations to form partnerships to protect natural habitats and to best serve our members and the public regarding mycological education and our North Texas fungal biodiversity.

On October 30, 2021, the North Texas Mycological Association teamed up with Pam Carranza from the Dallas Herbarium and her crew of plant collectors to find and identify fungi found in the Spring Creek Forest Reserve in Garland. Sebastian Tabibi and Eva Gordon carefully combed the underbrush for fungi and searched through rotting logs and trees for Polypores. They were accompanied by photographer, Anh Ainsworth. Once they identify the fungal species and properly document the findings with photos and samples, they will send the Dallas Herbarium the information.